50 years ago post-independence leaders met in Addis Ababa, coined the ‘capital of africa’, to establish a league of African nations. Being on the brink of shaking off the shackles of colonialism, leaders dreamed of building a prosperous continent based on African values of unity, solidarity and oneness. Today I am seated here sipping my coffee in the same place, where again African leaders convene again a few blocks across to celebrate the African Union’s 50 existence. Today when I work here new roads are being build witness to the new elan that Africa is regaining during its recent economic boom. A new generation of leaders convened again to celebrate. In the past 50 years Africa has witnessed a tremendous makeover. Turning back the hands of time, 50 years ago Nelson Mandela, was taken to prison for being black. As he spent his 27 years there, he was looking out of his cell hoping that he might live to see a different world. Outside his cellblock the television is showing images of starving children skin over bone in 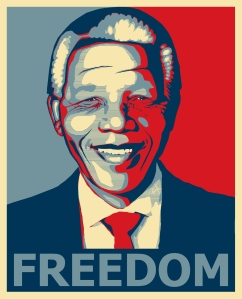 Ethiopia sending waves of shock across the globe.  Bono and Geldoff are calling upon the world to come to Africa’s rescue and the ‘we are the world’ LiveAid concert is to go down in history as the biggest aid fundraising event ever held. Ethiopia best exemplifies how Africa’s independence hope foundered and slid into famine and despair. However, today Africa is no longer solely object of the world’s pity but increasingly seen as a place of opportunity with South Africa recently hosting the World Cup. Let’s have a look at what went down the past half century going from hope to despair and more recently towards unearthing new found hope to a possible brighter future.

Yet before experiencing the economic re-birth the past decade echoes across the continent, it first was further to sink into debt, war and AIDS was yet to show its real teeth. In the 80s Africa was hit hard by the global crisis with demand for exported raw material plummeting and imported oil prices souring. On top of economic downturn, military conflict tightened its grip. In post-independence Africa (Nambia’s independence in 1989 marking the end of colonialism) civil conflict was rife cumulating into the 1994 genocide decimating Rwanda’s population and the first African World War in 1998 pivoting around Congo. Remarkably, it was during the same decade also the first sparks of a better tomorrow were seen with Nelson Mandela being released from prison and elected as president in 1994 heralding a new era of peace and reconciliation.

The turn of the century meant a turn in Africa’s fortune with African leaders adopting the Millennium Development Goals in 2000 an ambitious agenda endorsed by 180 states to declare poverty history by 2015. Government and aid programmes have done a tremendous jobs of getting children in schools and providing access to modern health care. Today primary school attendance is over 90 percent, while measles deaths have dropped by that same percentage since 2003. Debt cancellation of African states in 2006 helped pave the way for effective economic growth. However, most economic fortune has come from trade, not aid. Into the new millennium mobiles phones started to pour into the continent not only connecting Africa to the rest of the world but signaling new found wealth on the back of a surging global demand for its products and Chinese investment readily spilling over Asia’s boom into Africa. Kenya is now the global leader in mobile money transfers.

Truth be told, the economic boom hasn’t reached everyone equally. An inexcusable large part of the population still lives hand to mouth. But while the situation hasn’t changed for everyone, the outlook definitely has. An average African now votes, has access to (often free) education, vaccines, owns a mobile and has a fair (though modest) chance of being employed someday. Economic wealth has been coupled with better governance with fewer and fewer dictators being able to still cling on to power. Kenya for a few days descended into tribal chaos after its 2009 elections, but soon got back on two feet reminding everyone no one wants to go back to where it was before.

Africa on the catwalk

As Africa is no longer solely associated with war, misery and famine, other aspects of a diverse continent are receiving more attention as of late. West African drum beats and Congo’s rumba are becoming popular. Nigeria is home to the world’s second biggest movie industry, birthing more movies a year than Hollywood. The nascent fashion industry is another point in case. The extravagance and overly bright colours of the Congolese chaupeurs made early fame and a more organized fashion industry of ethnic prints, raffia-work and anti-linear designs is sweeping across the continent. While Africa has never been any good at mass production, it has a longstanding tradition of handmade craftsmanship. Haute couture needs hands more than machinery, and those abound. More and more African made designs now trot the catwalk.

The next 50 years; a brighter tomorrow

Africa is poised to take off over the next decades. The number of middle class Africans has tripled over the three decades to 313 million people, or more than 34% of the continent’s population. Today’s economic status is that of China in the 70s. With the world in flux, Africa is becoming an ideal place for risky investors looking to avoid stagnant growth rates in Europe. Its growth will be overshadowed by Asia truly becoming the world’s global giant. In that sense it is more a matter of catching up with the rest and it will continue to take a back-seat in world economy but that seat is growing more and more comfy. The past 50 years has seen a tremendous change Africa has transformed itself from food aid to potentially food exporting. It is refreshing to see Africa walk the world’s economic and cultural catwalk. The coming 50 years will tell if Africa is to truly unleash the lion it is at heart.