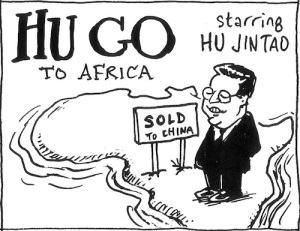 What I remember from my first visit to Ethiopia was the strange experience of being labelled Chinese for the first time in my life. During my trip through rural areas our jeep passing caused kids to run up to the road and starting to laugh, jump and shout ‘China! China!’ CHinA!!

Over a century ago the missionaries were the ones to penetrate the interior of Africa. Nowadays the European priests have been silently replaced by Chinese road construction workers. On no other continent outside Asia the Chinese footprint is clearer than on Africa’s landmass. Not only are its roads built by Chinese, they are Africa’s number one overseas investor. Large chunks of these investments go towards mine construction, digging up Africa’s natural resources. Often these go hand in hand, a good example being the landslide deal the Chinese government made with Congo to build a huge road across the country in exchange for ownership of some of its mineral wealth. In a similar fashion, in agriculture Chinese are blamed for ‘land grabbing’ by simply buying of up vast tracks of land from budget-deficit governments. Western criticism aside (which is low on credibility here anyway given its colonial past), in times of global peril Chinese prove to be a very helpful friend in times of need,  always prepared to slide over a billion here or there. The plain business rhetoric deride of any moral connotations is seen as refreshing by most. In short, African governments love China.

Apart from politics, there is economic rationale to prove that the China’s involvement in Africa is bliss. I once attended a lecture by one of the world’s leading development economists, Paul Collier, stating that the biggest development push of the last decade has been not been by any NGO efforts but simply the availability of cheap consumer goods imported from China. While organisations like mine try to increase income, Chinese work on the other end of the spectrum by simply lowering prices and thus creating a bigger bang for the buck. Instead of working hard to get an economically unprivileged farmer from 1 to 2 dollars a day (basically what I am trying to do here) Chinese products simply lower the costs of a 2 dollar product to 1. Truth be told, China is not lowering prices of basic needs like food, but mainly of phones, clothes, cosmetics and all kind of consumer goods. Chinese coming up on stage has led to a whole wide range of consumer goods being opened up to a much wider range of consumers than ever before. The mobile phones ringing in the most far flung places give testimony to this. However, this new kind of ‘development’ comes with a snag in it.

While the Chinese business man succeeds in offering the African consumer dirt cheap products, the actual price is being paid after the moment of purchase. That is; when it breaks. A common feature of any product that is Chinese made is its poor quality. It might just break on your way home. I had an interesting conversation with the driver from my office. He seemed to disagree with Paul Collier. Trying to vouch for the Chinese and the cheap products they bring to the consumer, he interrupted me ‘Cheap?!’ you think Chinese products are cheap Janno? Let me tell you something: If you just think about what you get for what you pay and how long it lasts, they are in fact very expensive!’ My driver belongs to a rare breed of African consumer that actually thinks long-term and rather spends a lot of money at once; a luxury few people can afford here. For example, he buys Clarks shoes. Clarks are imported from the UK and known here for their quality. Earning a local salary, he still thinks that this is a better deal than the Chinese pair which would cost him a fifth of the price but he needs to replace every other month. He not only refuses to buy Chinese products, he thinks that this junk is dragging down the country’s development. ‘The biggest challenge Ethiopia will have to face in the future is how to get rid of all Chinese products’ offering merely illusive prosperity.

Whether the Oxford economist or simply my streetwise driver is right I don’t know, but the Chino-African marriage is definitely a tetchy one.

7 Responses to Made in China