One of the definite rewards of being in a

foreign country is that you get to see the world through different eyes. Things that surprise you push you to rethink your own standards of normality. Some of my daily surprises include the over the top visual effects in videoclips exploiting every effect the editing program has to offer, the shining shirts that people would wear on special occasions like going to church, the longer than usual jackets of suits, the umbrella’s when it’s not raining, everyone having their wedding picture taken at roundabouts… Let me just give you two more examples to illustrate my point here in more details. 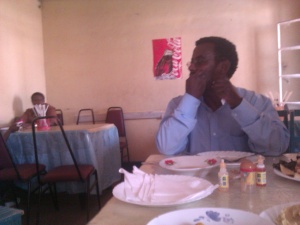 esign a restaurant seems to be more culturally defined as one might think. A restaurant here simply seems to mean a good collection of chairs (which they sometimes stuck upon each other to make a real ‘luxurious seat’), a number of white plastic tables, an old painting of a fake fruit basket staring at you from the wrong angle

Cant do without the fruitbasket..

, a menu that is more indicative of what they possible could have than presenting an actual list of available items. And lastly, a number of local staff outnumbering the number of customers resulting in the somewhat uncomfortable feeling of being watched.

As I write I am actually sitting in my favorite hangout place, it being that sweet exception confirming the rule. The

remarkably good atmosphere and the thought-through design just makes me appreciate all small coffee bar owners back home that took an effort to make their place stand out and add just that little flint of character. It might be the spirit of individualism that drives westerners to tirelessly seek that gap in the market and differentiate your shop from other, but somehow this is not shared by our African brother who would always default in copying what he sees his fellow entrepreneur doing. Self-centric individualism or not, it makes up for these sweet characteristic places which I have become to appreciate being without.

A second example is the rack holding the herbs in our kitchen. It might be a little thing but it just puzzles me is that the angle does not seem to bother the eye of the carpenter that made it for us, while it makes me shake my head every time I see it. Maybe it is our 17th century painters, our scientific past or our perfectly squared houses, maybe it is the traditional round huts here but somehow the love for mathematical precise lines is not shared by our African counterparts.  I guess it teaches me that worrying your head of having everything levelled and all lined up doesn’t really add that necessary ingredient in life, as people here seem to do comfortably without.

A lack of care to stand out as an entrepreneur and the lack of interest of leveling an herb rack is countered by a preoccupation for other things in life. It is interesting to see where the aesthetic eye of the Rwandan gravitates towards: the women’s hair. My wild 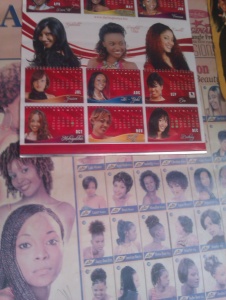 guess would be that apart from food, 1 out of every 3 shops is a hair saloon. While apparently black hair is very stiff not leaving the bearer a lot of options, the different haircuts walking the streets is simply astonishing. Braided, spiky, curly, straightened, extensions, afro-style, coloured, frizzy, pony-tailed, knotted, wavy, dread-locked, weaved or a mixture of the above, the possibilities are endless…

In a closing note seeing things through another peoples’ eyes makes you relative your own judgement and perception. It even makes me question the things that strike me as normal like paying a couple of euros for just sitting outside in the sun with a drink, starting to smile whenever a camera is pointing your way, or keeping a rabbit as a pet and feeding instead of eating it, or people running in a park without  heading somewhere. Trying to explain these things to someone here is quite a challenge I tell you. Well, I guess that while I don’t seriously alter my own point of view or act differently, an understanding is growing on me of why taking your wedding pictures at a roundabout is as good as voluntarily sitting outside in the burning sun.

Did you know that: